Kickin’ It: New Balance is the Mark of a New Era in Football

Our Kickin’ It series continues. Over the course of the last few weeks, we’ve delved into the history of adidas Football, the rise of Nike on and off the pitch, and even explored the Jordan Brand x Paris Saint-Germain partnership. For our latest installment, we’re taking a look at New Balance.

Although the Boston-based’s emergence in the sport is relatively young, its impact has been made on the sport measures beyond a timeframe. We discuss New Balance’s impact with Europe’s finest clubs, its star-heavy roster that continues to grow, and what’s on the horizon for the brand. In addition to that, we had the chance to speak to Andrew McGarty, Head of Global Football Sports Marketing at New Balance, to learn more about the brand’s energy on the pitch.

The brand’s silent rise to stardom was spearheaded by some of Europe’s most famed clubs. Though the club dressed Swansea City in the late 1990s, the NB logo on Liverpool’s and Celtic’s kits took the brand to a whole new level. Coinciding with the 2015-2016 campaigns, Liverpool and Celtic were treated with a look and feel rooted in club heritage and a modern look. 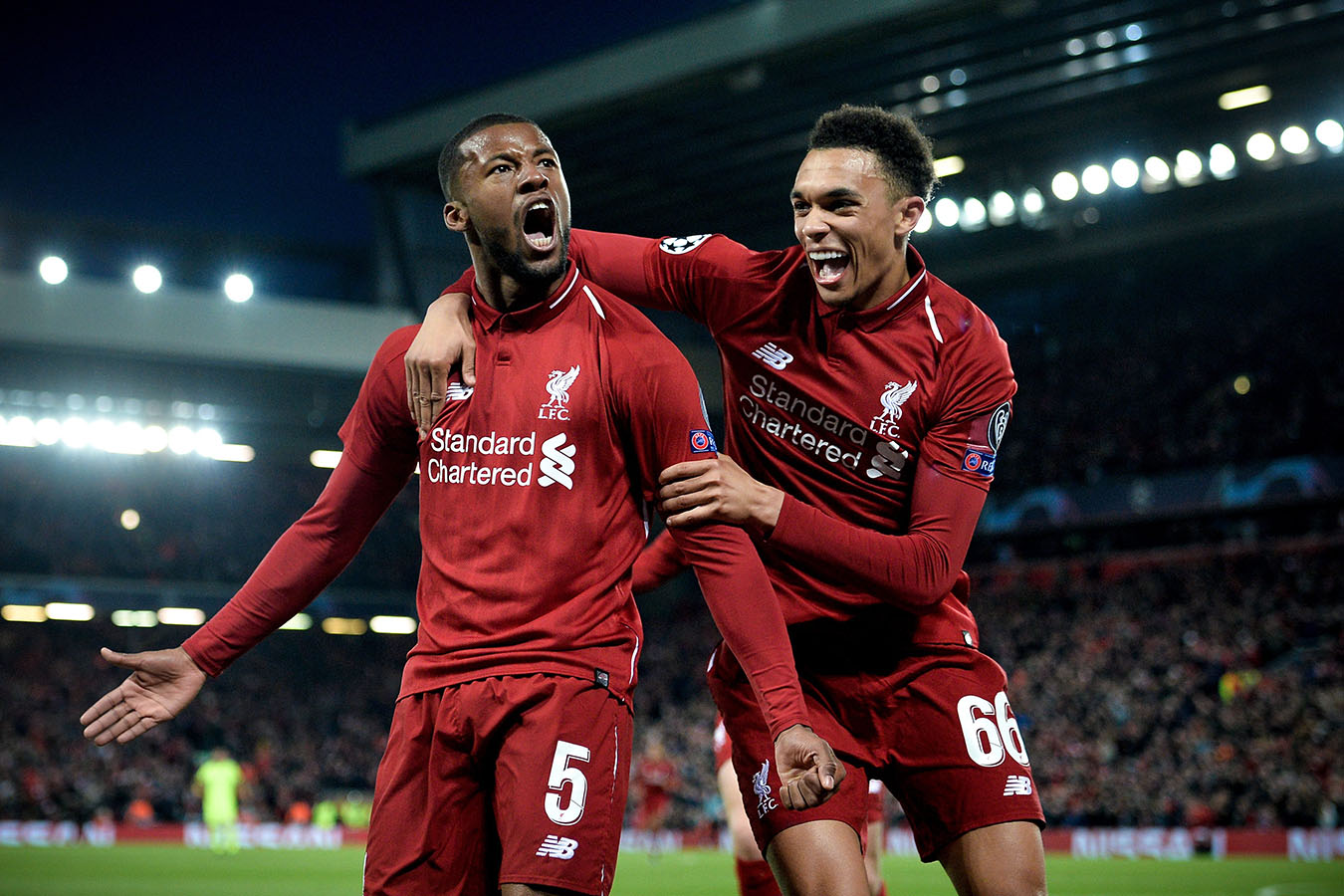 Wijnaldum and Alexander-Arnold in the 2018-2019 Liverpool F.C. Home Kit

In addition to the aesthetics of the kits, Liverpool’s dominance in Europe, from being crowned champions of Europe to clinching the Premier League title, the Scousers and New Balance walked together to glory. Though the brand no longer sponsors Celtic and Liverpool, the foundation set from these two prestigious clubs cemented what New Balance offers to the world’s most beautiful game.

However, the brand’s current roster of clubs ranging from CONCACAF powerhouses to European giants is slowly but surely ensuring that the brand’s presence on the pitch will only grow from here.

From current champions of France Lille LOSC to Portugal’s beloved F.C. Porto to the recent addition of Italy’s A.S. Roma, New Balance is at the front and center of Europe’s contenders at the highest level. Fusing elegance with simplicity, New Balance has continued its perfect formula for each club on its growing roster. 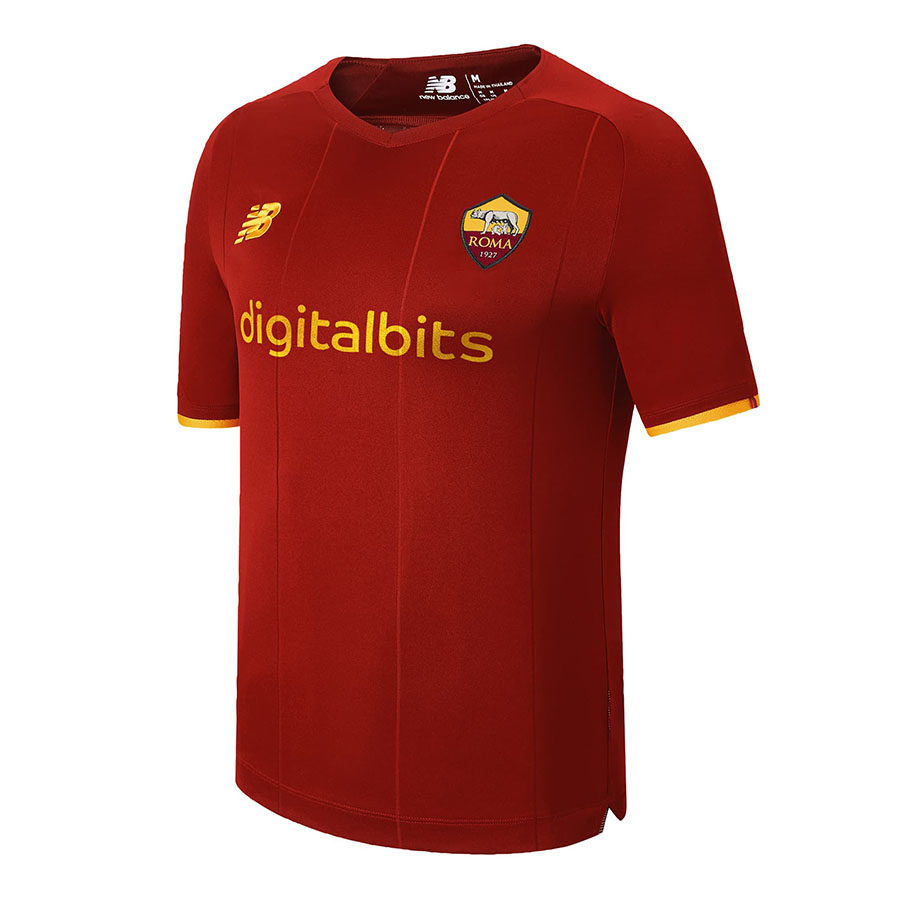 But its European pride isn’t the only focal point for the brand.

New Balance’s partnership with Panama and Costa Rica has been fruitful and fun for both the national team and its players on the international side of play. From Los Ticos’ Bryan Ruiz to Los Canaleros’ Blas Perez, the underdogs of the CONCACAF have shown up and showed out from the Gold Cup to the World Cup with the NB logo worn proudly parallel to the country’s crest. 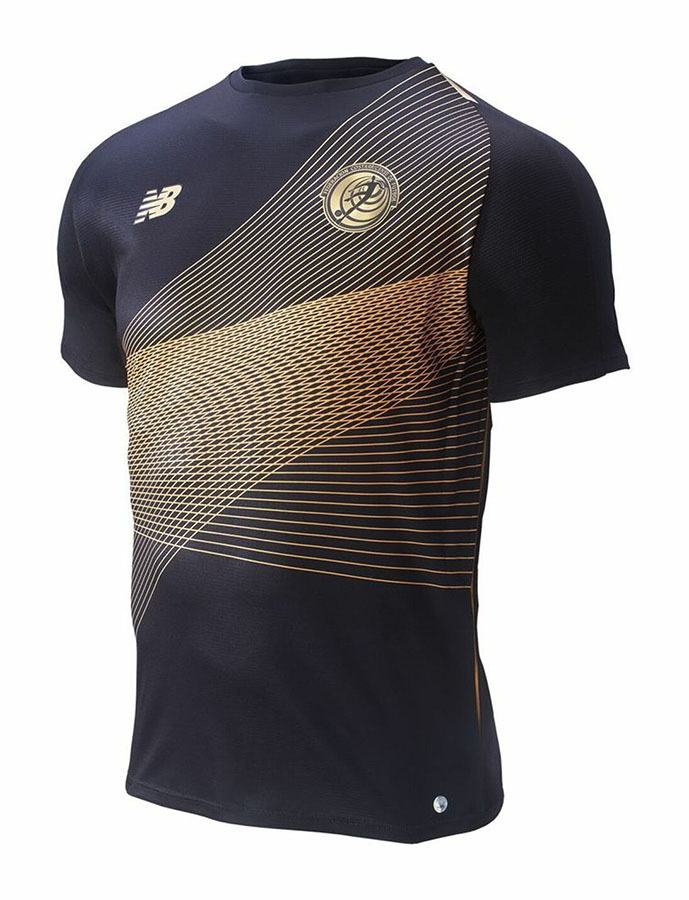 The New Balance roster could very well be the brand’s most important storyline in the future. While still in the works, the addition and recent contract renewal of Liverpool’s and Senegal’s Sadio Mané further proves that the brand and its football foundation are ground and bound to grow exponentially. 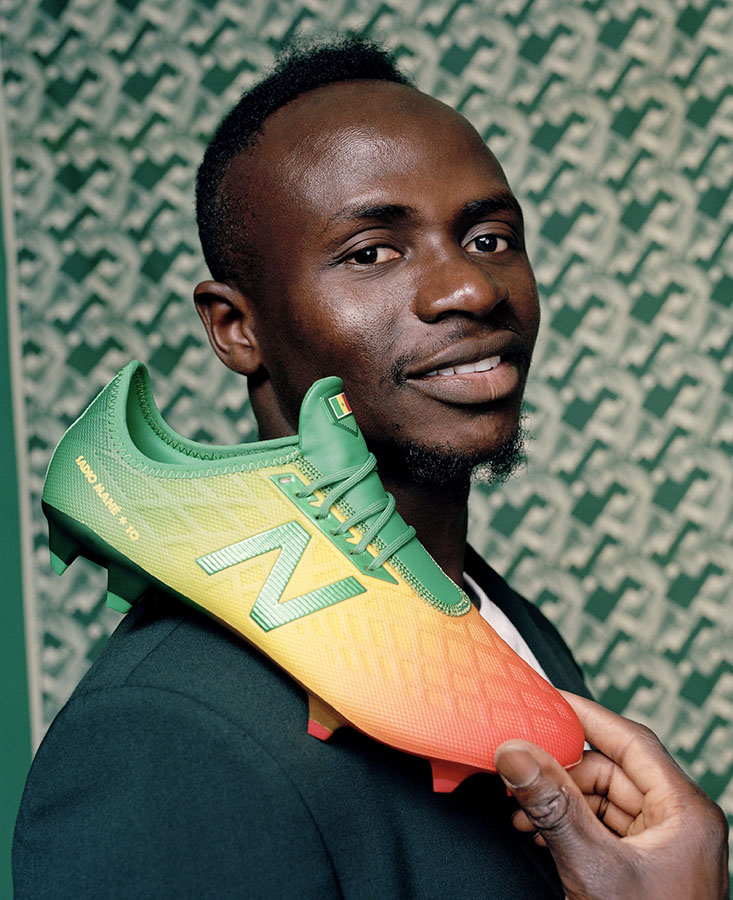 New Balance added Manchester City’s Raheem Sterling and Arsenal’s Buyako Saka within the last few months, both of which played phenomenally in Euros for the Three Lions.

“This spring was one of the most dynamic periods in New Balance Football’s history with the signings of Raheem Sterling, Buyako Saka, Eberechi Eze, Harvey Elliott, and the renewal of Sadio Mané,” Andrew McGarty, Head of Global Football Sports Marketing, New Balance, said.”It’s incredibly rewarding to know that our hard work is paying off, and the world’s top players are putting their trust in us to deliver boots that are going to enable them to play at the top of their game. With these athletes joining New Balance, we hope to continue to be a force for positive change both on and off the pitch. The future is bright. We will continue to value partnerships over sponsorships to find the right players for the New Balance brand.”

While their on-pitch performance is paramount for all parties, the Elliot and Sterling partnership will be the primary avenue for the brand as it looks to merge its football presence with some streetwear flair.

“When we sign athletes like Sterling, Saka, Eze, and Elliott, we’re looking for partners in multiple respects: not just partners who will help us evolve our boots, but partners who are eager to cross over into the lifestyle space and support the brand as a whole. Sterling and Elliott, in particular, have an affinity for high fashion, and we’re already collaborating closely with them on a number of projects that will appeal to the masses, not just football fans,” McGarty said.

If it’s anything like the recent New Balance collaborations, whether apparel or footwear, the sky is the limit for what New Balance can cook up for its ballers.

As the brand continues to grow on and off the pitch, exciting innovations will push the sport and the brand more and more. Whether it’s partnering with clubs and national teams, amplifying its player roster, or push the envelope on performance tech with its boots, all eyes should be on New Balance. 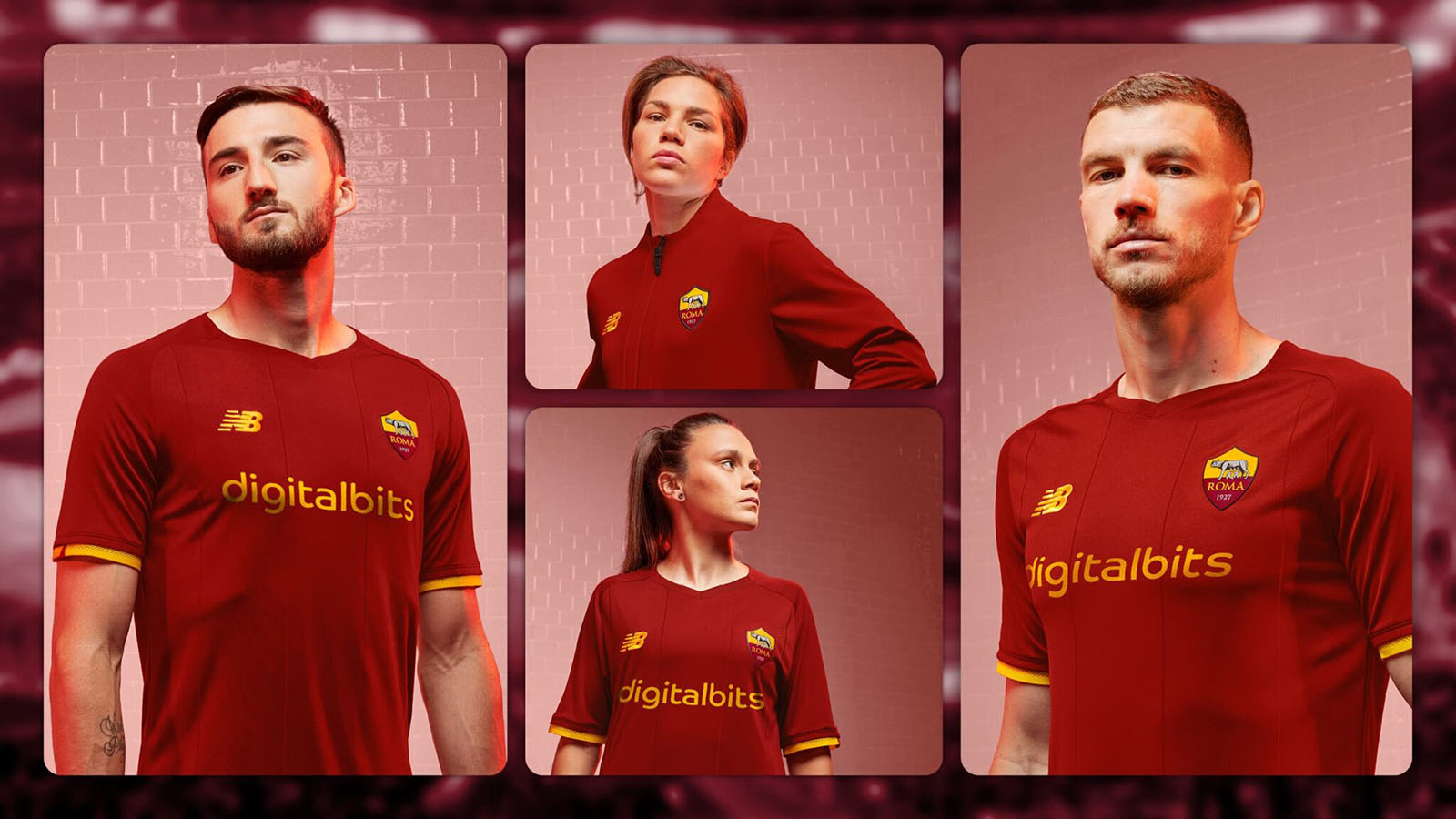 “Our latest high-performance boot, the Furon v6+, which is in the market now, is all about empowering our athletes with the ability to play with speed and accuracy, without any distractions. Its Fit Weave upper technology provides lightweight stability in the places players need it most, and injected TPU stud tips allow for forward-facing acceleration,” McGarty said. 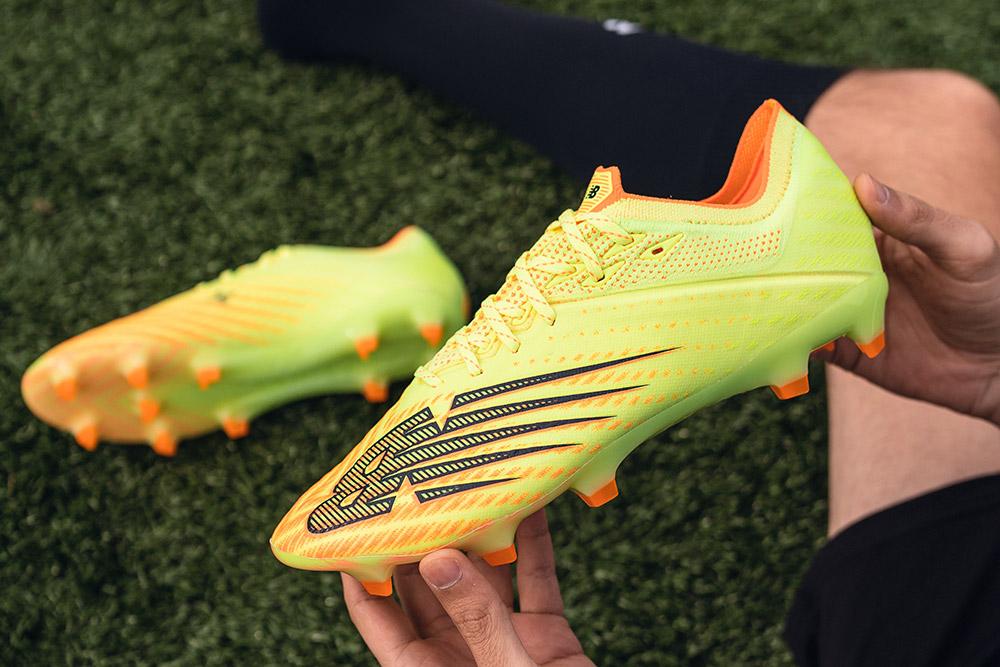 “The Tekela 3+ is for those players who see the game differently and want instant feedback from the ball and the ground; feel is everything to this player. We’re extremely proud of our technology and the fact that players can trust it to perform at the highest level right out of the box,” McGarty added.

Stay tuned to SoleSavy as the Kickin’ It series continues with an in-depth look at Reebok and PUMA. Keep it locked for more New Balance news, and be sure to sign up for a SoleSavy membership to learn more about the most genuine sneaker community out there and how to buy upcoming releases from New Balance.

Ambush x Nike return with the fourth colorway in t

It's all laughs. We sat down with @cjtoledano, sho

As brands and retailers look to combat bots and try to find ways to get pairs in the hands of sneakerheads, atmos USA is bringing… 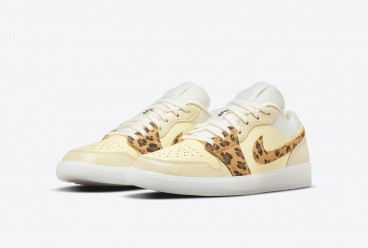 Nike is celebrating its SNKRS app with a set of exclusive drops. Headlining the upcoming “SNKRS Day” collection is the Air Jordan 1 Low, which… 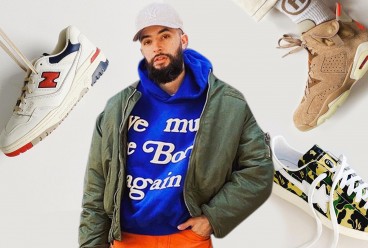 Today we are joined by Tyler Mansour, Senior Photographer at Kith and the man behind the lens of footwear’s most iconic shots also known as… 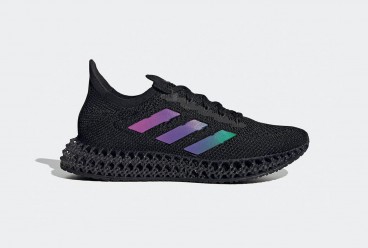 adidas’ 4D technology has become a household name for the brand in a short amount of time. Engineered for both leisure and performance, 3D-printed tech… 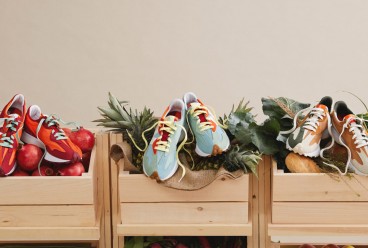 Todd Snyder, New Balance Head to the Farmer’s Market with the 327

The retro-inspired New Balance 327 continues to be the canvas for the Boston-based brand. While its 990 series, the recently revived 550, and other models…