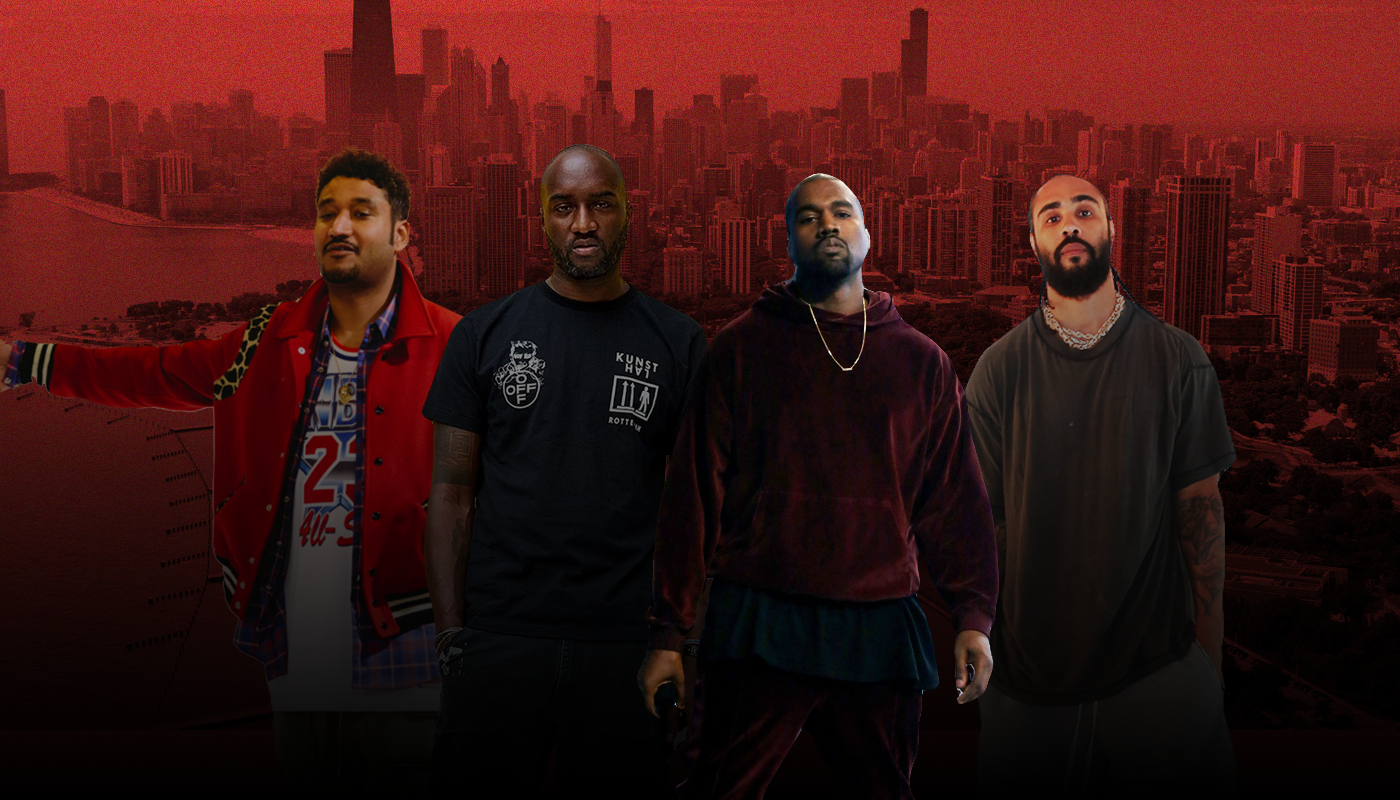 The History of the Chicago 4 Who Dominated All-Star Weekend

The Chicago 4: Kanye West, Virgil Abloh, Don C. and Jerry Lorenzo—owned the sneaker releases at NBA All-Star Weekend in 2020. Each designer had a high-profile sneaker release over those three days and has ties to the Windy City.

Chicago holds a crucial place in NBA lore, as the Bulls dominated the 90s with six titles. The game’s greatest player laced up the world’s most famous basketball sneakers at the United Center, site of a spirited 2020 All-Star game. On the sneaker front, many releases had the attention of the community and many traveled great distances to get in on the action.

Chicago native Kanye West left his stamp on the weekend with a memorable activation for the Yeezy Quantum, but the sphere of influence West cast over other releases from his collaborators and friends can’t be overstated. West, who had already done a BAPESTA in 2006, joined Nike in 2009 with the release of the Air Yeezy 1, the first of his highly coveted collaborations with Nike. The second iteration of that model again shook the sneaker landscape, and along with 3 silhouettes for Louis Vuitton, cemented West as one of the most important sneaker collaborators. In 2014, he aired grievances about Nike and eventually left the brand for adidas, where his shoes remain among the most important on the market.

West shook the streets at All-Star weekend. On Friday, two days before the game, the rattle of a fleet of black Military vehicles called Sherps could be heard rumbling through the Chicago afternoon. It wasn’t long before crowds began to gather behind the line of the giant-wheeled ATVs, as passengers handed out Yeezy Basketball models from the back. In one scene caught on social media, fans swapped the shoes off of their feet for a fresh pair of the new model. This unique activation for the new silhouette became the talk of the weekend.

Six years after West’s public divorce from the world’s most powerful sneaker company, he continues to be the source to which many other impactful designers draw their connections.

West’s former manager (and best man at his wedding), Don Crawley, known to most as simply Don C., released a Nike Air Force 1 with design cues paying homage to Chi Town. The sneaker’s blue hue with red accents is a reference to the city’s flag found on the back of the tongue. With design elements grafted from the Air Force 1, 2, and 3, the sneaker released in limited quantities through an American Express partnership. Unlike some of the other high-profile Nike Chicago exclusive releases from that weekend, this model was made available to Amex cardholders who managed to get through when it dropped online.

Don C. used the same colors to craft the All-Star version of Kevin Durant’s 12th signature model. He included a Chicago-specific element with a modified version of elephant print, famous for its appearance on the iconic Air Jordan 3, which Jordan wore during the dunk contest the last time the All-Star Game was held in Chicago in 1988. That version of the print is a proprietary Jordan design element, so Don C. flipped the print to include a pattern made of words from the Nike lexicon like zoom, force and flight.

West also has a deep relationship with another of the world’s most in-demand designers: Virgil Abloh. With roots in nearby Rockland, Illinois, Abloh still calls Chicago home. Together with Don C., he founded the RSVP gallery in the Windy City, a space that melds retail, art and music. West and Abloh met through Don C. at a Chicago printing shop called Custom Kings, where Abloh impressed the shop’s owners with his detailed designs.

Weeks later Don C. asked the shop owner about up-and-coming designers, and the two eventually met up. Abloh had designs ready for Don C to view, and because of Abloh’s work ethic and eye for details, West took an interest. West, Don C. and Abloh grew tighter, and Virgil eventually became a go-to thinker and designer for West.

West appointed Abloh as the creative director of the short-lived but culturally celebrated label DONDA imprint a year later. Abloh, often found near West with a laptop open to scores of reference points, established himself as an integral part of West’s projects. Abloh became one of West’s most trusted collaborators, eventually art directing the Watch the Throne album art, which has a heavy high fashion influence.

After numerous successful ventures, including landing the artistic director position at Louis Vuitton, Virgil presented a solo exhibition called “Figures of Speech” at Chicago’s Museum of Contemporary Art in 2019, where many of his sneakers designs took center stage. The retrospective charted Abloh’s indelible impact on design, including a large-scale collaborative effort with his Milan-based Off-White label and Nike called The Ten.

For All Star weekend, Abloh’s take on the Off-White x Air Jordan 5 was the shoe that Joe LaPuma said on The Complex Sneaker Podcast was clearly the most important release of the weekend. Abloh reinterpreted the iconic Air Jordan 5, the first prized model Abloh himself owned, by slimming down the model, removing the padding on the heel collar and adding a non-traditional synthetic grey material across the upper. Abloh added translucent circles to the tongue and webbed portions on the lateral and medial panels. Anyone who’s owned older versions of that model knows that the translucent portions on the panels and outsole would yellow over time, so Abloh took that design cue from aged models and added it to his version. This shoe, perhaps, best represents what makes Abloh one of the world’s most in-demand designers—the delicate blend of honoring an iconic piece of design history with tasteful innovation that elevates the model.

Jerry Lorenzo also has ties to West and made a definitive impact on the weekend with the release of his Fear of God 1 at St. Alfred in Chicago. West’s sphere of influence reached Lorenzo, son of former Chicago White Sox manager Jerry Lorenzo Sr.

After switching gears from nightlife promoting and investing $14,000 of his savings in the first collection for his own clothing line, Lorenzo made waves. Abloh saw the collection and travelled with Lorenzo to Atlantic City to share the pieces with West. West became a frequent collaborator, as he entrusted Lorenzo with input on high-profile collections like an A.P.C. collaboration, Yeezus tour merch and Yeezy Season One. While working at the Diesel store in Chicago, Lorenzo remembers the impact of hearing West’s “Jesus Walks” on the store’s speakers. Lorezno’s company, Fear of God, takes its name from his pride in his Christianity, which also ties back to West’s confident declaration of his own religious connection that his song proclaimed.

Lorenzo’s Fear of God 1 silhouette showcases the designer’s future-forward minimalism. For the colorway released that weekend, Lorenzo took influences from Allen Iverson, as the promotional photographs by photographer Gary Lane paid homage to iconic AI snaps. Rumors emerged that Nike took exception to the over Reebok connection, and for now the sneaker has no official wider release date, making that Chicago release at St. Alfred the only time, so far, that the shoe hit the shelves.

Many other shoes grabbed attention that weekend, but the sneaker world felt the impact of Kanye West, Don C., Virgil Abloh, and Jerry Lorenzo. Looking back at the fallout West had at Nike, the concept of loyalty to friends and collaborators trumped corporate ties. West has roots in Chicago, roots in fashion and roots in music. Among the many who he’s inspired, the Chicago 4 include designers shaping the sneaker landscape, not solely in the Windy City during All-Star Weekend, but for years to come.