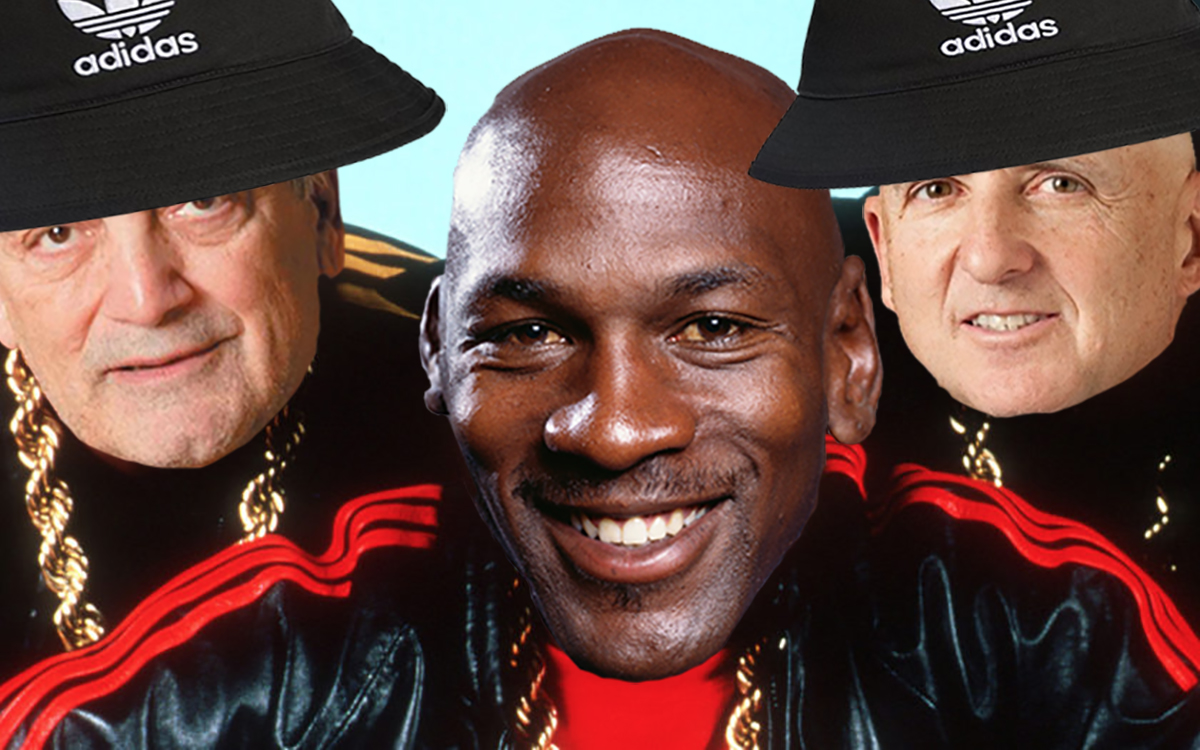 What if Michael Jordan Signed with adidas?

The world of sports is filled with plenty of ‘What ifs’ scenarios, with many of the most exciting ones involving Michael Jordan.

Despite rewriting the manual on greatness and marketing, Michael Jordan’s road to a billion dollar brand and six NBA championships is full of forks. What if Mike was drafted by Portland? What if Mike left Chicago and signed with the Knicks? Better yet, what if Mike never took the meeting with Nike and signed with adidas?

The last query may be the hardest to fathom but perhaps the closest to happening.

While Sonny Vaccaro and David Falk were big on MJ signing with the Swoosh, a young Jordan was in love with The Three Stripes. Just how much did a 21-year-old MJ like adidas? He’d wear the Three Stripes in UNC practices while the rest of the squad took the court in Converse. Wearing it often off the court and mentioning it in media, a young Mike loved adidas.

If he originally had his way, he’d be with the German juggernaut. However, thanks to some nudging from his mother, he took the meeting with Nike and as they say, the rest is history.

While all is well that ends well, what would Michael Jordan’s illustrious sneaker series look like if he never took the meeting with Nike and signed with adidas instead?

We do not. But we do have a good guess.

Looking at adidas’ arsenal, Mike’s needs and the industry’s trends, here is MJ’s signature series 1-14 reimagined if he signed with The Three Stripes.

Keep in mind that before Mike signed with Nike the idea of a rookie basketball player having his own signature shoe was absolutely unheard of and keeping the line going through and past a career was unprecedented. Could another brand have done what Nike did with Mike? Extremely unlikely. Would David Falk still have forced the hand of whoever signed Mike to at least attempt a signature series? We think so.

The Air Jordan 1 is… the adidas Forum

Priced at a lavish $100 – which adjusted for inflation looks like a $247 MSRP in 2020 – the high top hoop shoe with big branding and premium leather would’ve been a layup for MJ had he signed with the Three Stripes. If there’s no Mike on Nike look for him to win Rookie of the Year in Forum rather than the Ship and the AJ1.

The Air Jordan 2 is the... adidas Attitude Lo

Michael Jordan’s second season was plagued by injury, appearing in limited action and wearing ankle-strap and Dunk sole assisted versions of the AJ1. While MJ would’ve likely ran the Forum back for a second season if with adidas, his third year with Nike found him alternating between high and low versions of the AJII. If he signed with the Three Stripes, though? Things would’ve looked a bit different.

MJ’s Olympic teammate/collegiate rival, Patrick Ewing, was the man at adidas over the course of the 1986-87 season. Put Mike in Pat’s shoes and he’s rocking the Attitude in similar blocking to that of the AJII, likely leaning towards the Lo for speed and style.

The Air Jordan 3 is the... adidas Broughman

1988 was a pinnacle year for MJ and a pinnacle year for hip-hop. On the hardwood, Mike was tearing up the league statistically, taking home MVP and Defensive MVP honors while leading the NBA in scoring and steals. On the wax, NWA, Public Enemy, Ice-T, Slick Rick, EPMD and others were dropping classic albums that defined and reshaped the genre.

Much of the above culminated at the NBA’s All-Star Weekend in Chicago that same year when Mike jumped from the free throw line in his loud Air Jordan 3s. Brash and bold like the man and the music of the next generation, the 3s took Mike and his line to new heights. If he signed with adidas, the design impact couldn’t have hit as hard as the AJ3, but the cross-marketing moment could’ve been bigger. Put Mike in the Run-DMC approved adidas Broughman and the title Tougher Than Leather has a whole new weight.

The Air Jordan 4 is the... adidas Artillery SE

Around the league, brands were backing their top-tier basketball shoes with a breadth of players and leaning on leather. Such was the case with the adidas Artillery SE. Worn by wings across the Association, the design was more or less an aggressive update on the shoes that came before it. Taking on Craig Ehlo and Joe Dumars in the Eastern Conference Playoffs, adidas would’ve armed MJ with the Artillery SE in 1989.

The Air Jordan 5 is the... adidas Torsion Artillery

By 1990, all brands were getting on the tech wave if even Mike and Co. were lightyears ahead. Nike was leading with Air, Reebok was gaining with the Pump and adidas was introducing Torsion.

The least sexy of the three, Torsion launched in running in the late ‘80s, eventually getting to hoops on the adidas Torsion Artillery. The result was a tougher, more technical take on the SE, comparable to the jump in aggression and tooling that MJ saw from the AJIV to the AJV.

The Air Jordan 6 is the... adidas Streetball I

Mike, Larry and Magic made basketball America’s new favorite pastime over the ‘80s. By the 1990s, the game had exploded around the world to gyms, playgrounds and driveways in each hemisphere.

The adidas Streetball paid homage to the outdoor game at a time when major footwear brands and cinema showed love the same. The Streetball might not have the big screen cache as the Air Jordan VI saw on Batman, but if Mike’s on adidas maybe Sidney Deane dons different sneakers with Billy Hoyle.

The Air Jordan 7 is the... adidas Mutombo

he Air Jordan 7 was technically defined by Huarache innovation and aesthetically amplified by Afropop art. If MJ were to have signed with adidas rather than Nike, it’s not far-fetched to think that his seventh signature would’ve looked a lot like the adidas Mutombo.

Designed for Dikembe, the high top hoops shoe paid homage to the center’s Congo roots while timing well with the rise of Afrocentric hip-hop expression in the early ‘90s. Strong and supportive, this pair would have graced MJ on his road to his second ring. It would’ve also made a strong statement in the Barcelona Olympics.

The Air Jordan 8 is the... adidas EQT B-Ball

When Nike was pushing Huarache, adidas was pushing EQT. The Equipment series spanned all categories, sporting a similar sock style to that of Nike’s sandal sneakers.

No hoops shoe better optimized this than the EQT B-Ball. Worn famously by Mike’s rival John Starks, the pinnacle product for adi Hoops would’ve carried MJ in ‘93 had he signed with the German giant.

The Air Jordan 9 is the... adidas Streetball II

The Air Jordan 9 got more burn from Mike on the diamond than it did on the hardwood. Worn by MJ in the dugout, on the set of Space Jam and in retro life as a Wizard, the shoe is well-revered even though it wasn’t well worn compared to its contemporaries.

Taking well to Mike’s basketball sabbatical that took him outdoors, the Streetball II carries a similar balance of toughness and smoothness to that of the AJ9. The abundance of black and grey doesn’t look half-bad with a Barons uniform either.

The Air Jordan 10 is the... adidas EQT Key Trainer

The start of 1994 saw MJ playing for the Barons and the Scorpions, not the Bulls. With basketball on the backburner, the Air Jordan 10 was geared more towards celebrating greatness than carrying a comeback. Ironically, Mike would return to the court in the AJ10.

With a focus on cleated categories and bottomline, it’s hard to imagine adidas would pause to celebrate — it’s more likely they’d roll over the MJ machine into training and baseball. A model like the Key Trainer would play well to cross-training and cross-category function. Its design, tech and color-blocking all cater to building the brand and EQT franchise — both things adi would love.

A case could be made that the man made the shoes when it comes to the Air Jordan line. Regardless of how bold or how tame the design, everyone wanted to be like Mike.

The Air Jordan 11 was more than just Mike the icon, it was different. The AJ11 saw the designer, the brand and the athlete all at their highest powers.

Looking back at the mid-90s, adidas had some heaters but nothing that holds a candle to that of the AJ11. Considering the strength of the EQT franchise and what the brand was designing for dynamic two-guards, the EQT Top Ten 2010 would’ve been ahead of schedule but on time for going 72-10.

The Air Jordan 12 is the... adidas Real Deal II

In the late-90s, adidas’ stake in Chicago was not Mike — it was Antoine Walker. While the NC native named MJ defined the Windy City in regard to hoops, the generation of locals that came up under him would be felt in the league for years to come as seen by Employee #8.

Add some infrared accents to this EQT sleeper and Mike’s Flu Game looks much different.

The Air Jordan 13 is the… adidas EQT Elevation

Kobe Bryant’s adidas EQT Elevation was a classic case study on adidas Basketball in the late ‘90s. Fast design, youthful branding and signature tech all played well to the teen phenom from Philly.

More mature in his game, age and rank in 1997, MJ was in another category than Kobe as a player but he still would’ve been the top talent on adidas had he signed with The Three Stripes. If Mike signed with adidas as a rookie does that mean Nike goes all in on Kobe coming into the league? We think so. Because of this, we’ve got Chicago finale Mike in the EQT Elevation and sophomore season Kobe in the Nike Air Pippen II as his first signature with the Swoosh.

Swap in the AJ13’s hologram for that of the Feet You Wear face logo and the EQT Elevation adjusts fluidly to Mike’s Last Dance season.

Closing off his final campaign in Chicago with two signature silos, the adidas KB8 II takes the place of the Air Jordan 14 in this ‘What if’ analogy.

Dipping Kobe’s purple pair in that of Mike’s team tone, the foreword-thinking design does not see the Ferrari sleekness of the AJ14. However, the visual of Mike rocking this rendition could see synthetic uppers and all-red sneakers having a major movement ten years prior to their apex.

Mother may have known best 36 years ago when Mike took the meeting with Nike, but that’s not to say an alternate reality isn’t fun to explore.